Manchester United striker Marcus Rashford has been given one of the biggest honours in Britain.

The 22-year-old is now a Member of the Order of the British Empire (MBE).

Earlier this year Rashford launched a campaign to combat child poverty in the UK.

His efforts resulted in the UK Government changing its policy on free school meal vouchers during the lockdown.

It ensured kids in need didn’t go hungry during the summer break.

That tireless work gave children a six-week voucher to get them through the school break.

This summer he received the PFA Merit Award as a result.

“I’m incredibly honoured and humbled. As a young black man from Wythenshawe, never did I think I would be accepting an MBE,” says Rashford.

“This is a very special moment for myself and my family, but particularly my mum who is the real deserving recipient of the honour.”

He goes on the say the fight is far from over.

“Let’s stand together in saying that no children in the U.K. should be going to bed hungry,” he said.

“No matter your feeling or opinion, not having access to food is never the child’s fault.”

The Queen’s birthday honours were delayed back in June due to the coronavirus pandemic. (JSL)

Fernandes named United Player of the Month in November

Pfizer vaccine for Covid approved for use in UK

A Huge Christmas Market Will Take Place in Manchester

Fernandes named United Player of the Month in November

Pfizer vaccine for Covid approved for use in UK

A Huge Christmas Market Will Take Place in Manchester 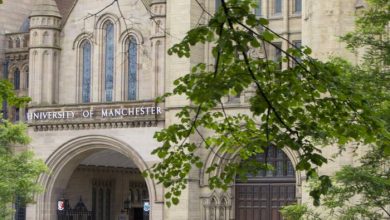 In Student Lockdown Party, More than 80 People Were Stuck In University of Manchester